WHOA! The Walking Dead Season 7 started with a complete shock! I was devastated seeing Negan killing Abraham and our beloved Glenn in his brutal game! Some say Season 7, Episode 1 has the most brutal death scene of all time. It’s been 6+ years for ‘The Walking Dead’ and we are watching Glenn since the very first episode where he rescued Rick from beneath the tank! The same guy who then drove alarming mustang back to the camp. Viewers are in Tears, some of them are even angry and protesting. When I saw the episode it felt like I was reading the comics again. It’s exactly the same. KUDOS to the direction. Before the start, before the first episode, we were waiting for the answer of ‘Who Does Negan Kills’? Now we know the victims. Have a look at some of the tweets below: 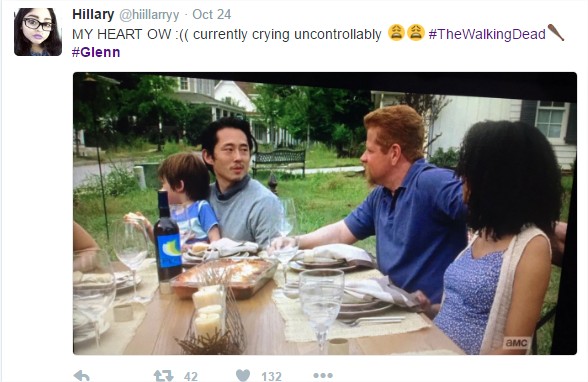 The crazy thing is we got, one leaked video via internet and it seems like pregnant farm girl Maggie was Negan target instead of Abraham. It would have been the biggest most shocking episode in the entire TWD history. Thank God it as altered… Not that we don’t love Abraham but ‘Maggie’ I personally adore more…

Have a look at the video below: (Sometimes I feel like it’s a fake video. Rest you guys decide)
https://www.youtube.com/watch?v=mjaSpE9lSx0

Do you think it was a wise decision to keep Maggie alive? Share your views in the comments below!