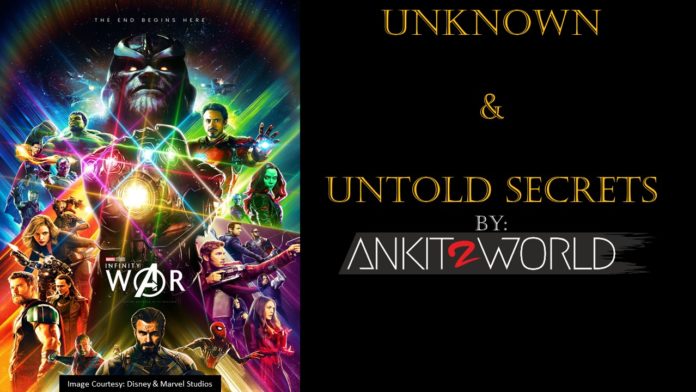 To all the Avengers fans, if you seriously think that Marvel has shown the major plots and revealed a lot, I suggest you think again. From past series of Marvel movies, I have learned one thing for sure, and that is, never trusts the Marvel trailer, because the movie blows me off every time I see it and I can’t even imagine how puny the trailer actually was…

We tend to think, we know it all, but there is always big time hidden secrets in Marvel when it comes to their movies and same goes for Avengers: Infinity War. Believe me, I have seen the trailer and trailer reviews more than 200 times now; I have read almost every Avengers comic by Marvel and that’s how I am 100% sure about my earlier article on the ‘Avengers: Infinity War characters, superheroes, and secrets. To read click here.

Remember Captain America: Civil War, wherein the same scene Spider-Man was not visible in the trailer but was there in the movie… Don’t remember? Have a look below:

So let’s get down to Avengers: Infinity War trailer now. What Marvel has shown us and what Marvel wants to hide from the fans in their trailer: (Total Assumptions and my Expert Opinions – Not Guaranteed) so don’t get your hopes too high 🙂

No. 1: Tony Stark is holding someone’s hand and is grieving.

Seems like someone either is dead or badly injured. Who can it be? We know Tony very well. He is not going to shed his tears for just anyone. According to me, there can be two scenarios.

Scenario No. 1: It’s ‘SPIDER-MAN who’s trying to impress Tony from a long time and comes in between the major fight of Thanos and Iron Man to save his mentor he looks up to. I am not saying he will be dead, he might be seriously injured as the leaked Comic-Con trailer shows Spidey saying “Sorry” to Tony Stark.

Scenario No. 2: It can be ‘Hawkeye’ who is nowhere to be seen in the trailer. If it’s Hawkeye, I am sure he is dead and asking Tony to take care of his family.

No. 2: What is ‘Thor’ Holding in his hand? (Seems Edited, Just like the Captain America: Civil War example I gave in the starting of the blog)

I am sure, it’s the ‘Jarnbjorn’ as mentioned in my previous blog. Read Here

No 3: Where is Ant-Man and The Wasp? This one not really sure about 🙁

Marvel is not giving out even a single clue about these two characters who are going to play a major role in the battle against Thanos and as we all know, it’s BIG if Marvel is trying to hide it.

All the ‘Avengers: Infinity War’ trailers show Tony aka Iron Man either getting beaten up, sad or shocked. What can that mean, are we really going to lose our most favorite and beloved Iron Man in the movie? The 80% of the Answers are YES, Iron Man is going to die.

No 5: HULK is in a Hulkbuster Armor

Ha! Ha! Ha! This, I am sure many failed to figure out… But if you’ll have a closer look at Hasbro ‘Hulk’ Avengers: Infinity War special edition toy, you will observe something spectacular!

Also, not to forget the Russo brother interview in which they told all the Marvel fans to be ready with the tissues to cry because in ‘Avengers: Infinity War’ someone beloved will surely die… OH DEAR GOD, Please not Tony, not Tony….