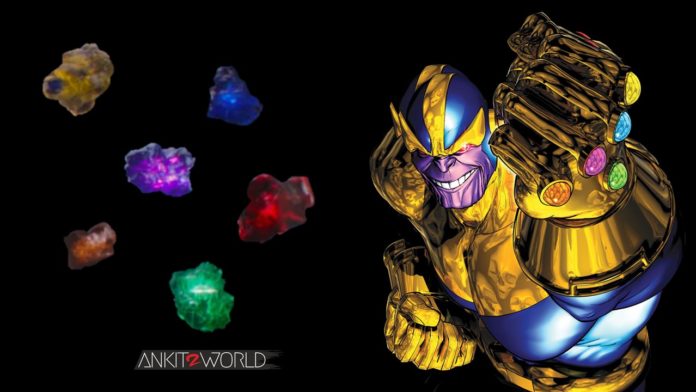 We ‘FANS’ know that we are going to witness MARVEL’s biggest, most amazing movie ever, thanks to the Infinity War. A special thanks to ‘Thanos’, who finally decided to collect all the stones for himself. He has been waiting since first Avengers movie to do the same. You think Captain America: CIVIL WAR airport battle was the best fighting scene ever? Think again, we have more Superheroes in Infinity War and the badass villain of all time – THANOS.

While we are thanking Thanos, we should thank the stones as well. Without them, Avengers would not have been possible. The Infinity Stones also known as Infinity Gems are the most powerful stones on earth in MCU. For those who don’t know about the comics and think that there are only 5 Infinity stones, sorry to burst your pop guys but actually there are Six Infinity Stones.

In Guardians of the Galaxy, the collector explained that even before the universe was started, there were six singularities. Those six singularities were then compressed in stone or ingots. They say in MCU that whoever controls all the six stones has the power to change reality.

So here I am working hard (actually reading comics and doing research, if you consider that hard) to tell you about all the infinity stones and their present whereabouts in the Marvel Universe.

Stone No. 1: SPACE STONE
Color: Blue
This stone has the power of Interdimensional Space Travel.

Where is it right now: Loki uses this stone to open a portal to let Chitauri come in and attack New York in the first Avengers. Then the stone was given to Thor to keep it safe in Asgard. But now, I think it’s with Loki. As the last time we saw Loki in ‘Thor Ragnarok’ when he heads down to the Asgard treasure room for Surtur’s Helmet during the fight with Hela (Death), he spotted ‘Tesseract’. Though what he did exactly is not clear, we all know Loki and I am sure he pocketed the Space Stone.

Stone No. 2: REALITY STONE
Color: Red
This stone was first introduced in ‘Thor: Dark World’ as Aether. This stone can change any matter into dark matter.

Where is it right now: At the end of Thor: Dark World the stone was given to the collector by Sif and Volstagg. After they leave, the Collector ominously says, “One down, five to go.”

Stone No 3: POWER STONE
Color: Purple
This stone is powerful enough to destroy a planet. This stone gives its bearer an unmatched cosmic power. Also, the stone will destroy any organic matter or being that touches it.

Stone No 4: MIND STONE
Color: Yellow
The Mind Stone gives the power of enslaving other beings mind and make them do what you want. As shown in the Avengers, where Loki enslaved Hawkeye into his team through his ‘Chitauri Scepter’.

Where is it right now: Loki was defeated in Avengers and the scepter was taken under a custody by S.H.I.E.L.D. Then in the Avengers: Age of Ultron, Tony and Banner accidentally used the stone to give life to Ultron which of-course backfired as Ultron was deeply evil and twisted. Then Ultron used the stone to give life to Android Vision which was neutral. Thus the stone lies on Vision’s forehead which gives him powers.

Where is it right now: At the end of Doctor Strange movie, Strange gave it back to Kamar-Taj to keep it safe.

Stone No. 6: SOUL STONE (Not Introduced in the MCU Yet)
Color: Orange
This stone allows opening the place of peace and calmness. The pocket universe captured souls live in the stone in complete harmony. Once stuck in the Soul Stone, it’s impossible to return and leave the realm. But there were few who came back according to the comics. Those few are Gamora, Adam Warlock, and Magus. The Soul Stone can steal the abilities and powers of all the souls living in the soul world and give it to its bearer.

Where is it right now: I am not sure about this specific stone. So all gut feeling, after seeing the trailer of Avengers: Infinity War seems like Thanos’ Army has attacked Wakanda – The home of Black Panther. But I don’t think Thanos has any interest in the Wakanda’s Vibranium (I can be wrong though). Thanos goes to Wakanda to recover the Soul Stone. If you see the Black Panther Movie, a big meteor of vibranium hit the earth, but see it closely, the lights of the meteor resemble the color of the Soul Stone. Also, because of that Meteor, the life of the plants and animals in Wakanda is affected and how can we forget the heart-shaped flower or herb which gives the Black Panther his superpowers. If you read the comics, the world on the Soul Gem looks a lot like Wakanda.
[socialpoll id=”2493047″]
No one can ever touch these super powerful Infinity Stones with bare hands. The stone requires a weapon of some kind which can hold them in order to save its bearer from dying with excess-power, like Thanos’ Infinity Gauntlet (The Glove). Which I think will be represented in ‘Avengers 4’ (Unnamed) as I mentioned in my other blog. HERE

I hope you liked the information on my blog. Feel free to share the same with your friends and family. Also, let me know your views in the comments below.