Records of Ragnarok follows a really simple yet really interesting Plot if I have to explain it to you in just a few words it is going to be Gods vs. humans plus Valkyries. (Valkyries are originated from Norse mythology they are depicted as an armed woman riding a horse, boar, or a wolf. In the storyline, they play a really huge role). if you haven’t got your basics cleared about manga & missing that humor in life does check out my first blog. (Self-promotion is necessary)

What is Ragnarok? A battle between gods & humans, why you ask? The fate of humanity is in hands of humans or we can say gods but ultimately in the fists of humans. There is a meeting that occurs every 1000 years between all the gods from every mythology. It is such a cool panel all gods sitting in a big auditorium discussing whether humanity should continue to exist or perish & ultimately they decide that humans should perish. Sometimes even I just want to perish what is the use of existing?

Then enters our beautiful Brunhilde (Valkyrie) who proposes why not a series of battles between Gods vs Humans where each of them will say & do epic shit to engage the reader into the simplistically unreal plot? The reader will be amazed by the cool historical figures like ( adam, Lü Bu, etc.) wielding a mystic weapon which is actually a valkyrie itself & battle wickedly depicted gods. Not every god though so, there is a great balance of hero villains & anti-heroes. I meant to say at some points you can’t differentiate between good and evil. Hercules apostle of justice is fighting from the gods’ side to help them perish humans but he wants to convince the gods to not let them perish. While his opponent Jack the ripper a homicidal maniac, a menace to society & the highest of evil is fighting from the human side to save humans from doom. How crazy it is a serial killer is trying to save humans while having the same murderous intent.

To spice up things & develop enough emotions towards the characters the author has added backstories in every fight & based on the intensity of backstory you can judge for yourself who is going to win.

That is the whole plot basically 13 fights of humans vs gods. If, you are an admirer of history & action you are going to love it. I would say this is a creative way of delivering action & philosophy together. But the whole plot is repetitive as of now. I expect at least something greater than the battles a whole bigger picture to the complete storyline. If the story goes simply like it is going I don’t think I will be recommending it as much but, It is still too soon to judge since there are only 50+ chapters. It is a great read if you are looking for some history lessons with epic quotes to add to your dictionary.
Some pointers
DO NOT WATCH THE ANIME !! The anime doesn’t do justice to the manga it could have been better executed
(There is some depiction of gods which you may not find appropriate)

Overall, this is a good read provided that you are an action genre lover & history enthusiast. It will keep you on your toes as the fights oscillate between high & lows.
Even if you don’t like this one still, I will keep trying to give you more genre-diverse & awesome content throughout my blog writing journey because…

Okay, Tschüss guys see you next time in the next blog. 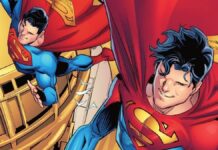