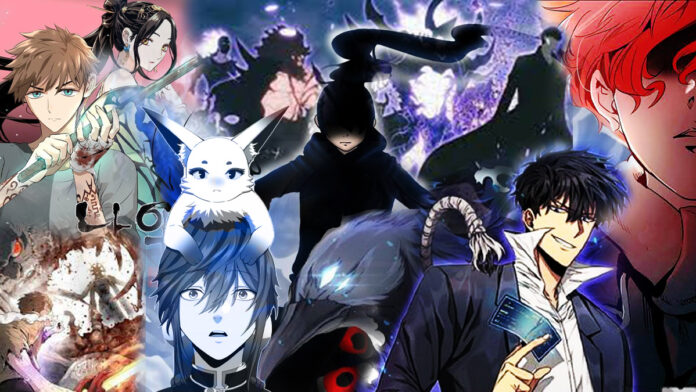 So, today kids I am going to tell you about 5 Korean Comics (Manhuas) that you should read Obviously if you want to. There is a small catch after the last blog I was told that there was very little Content over the theme and more jokes. So, there will be more jokes this time and less Content I have to provide you guys with quality content right?
Without wasting any more time let’s get into it.

Well, due to its super high popularity & testicles stunning art. It is grabbing a lot of attention worldwide. Since I want to grab attention on this blog & this may be the last time I am writing here because after the failure of my first blog THE BLOG LORD is pissed.

Overall, the story follows a world where there are dungeons that contain magical beasts & all other shit( Lazy writing strikes again) & Humans have Powers cause why won’t they? So, our protagonist is an E rank hunter who gets a huge power up when he dies & later on saves the world with ease.

Truly, I think it is getting into more of an overhyped category. If this is going to be your first manhua. Then, go ahead! It is a great entry gate into manhuas. But, if you are like me who has read a lot & after every read, you are expecting more than the previous one, I don’t think you are going to like it as much.

So kiddos, this was my gateway into manhuas. I remember after watching the anime, there were so many questions unanswered. After reading the manhua I can definitely say TOG anime is shit. Man so many awesome characters the storyline just makes you want to read onn& on. Every arc gives you a new feeling itself. But yes there are many characters to follow. So, you may not always remember the names of every character. The villains just take my heart away & Mc is a simp for most of the part.

The chapters are long so if you want to start a new journey of over 500 + chapters. You must definitely give it a try. It gets lengthy sometimes but Definitely one of my favorites because characters actually show progress and there are a lot of backstories to discover.

One of the most cunning, smart & funny characters MC. The story follows a greedy tomb raider who gave his all in his previous life to the company he was working in. (story of every corporate employee). But, was deceived by his boss & got killed in an excavation. Then, to our surprise, he was revived by some mysterious power. In the newly reincarnated life, he sets out to take revenge & get all the relics for himself with plot armor and all the knowledge of future happenings. I don’t know why Koreans are so obsessed with reincarnation. I think they highly believe in giving people second chances. But, what is the use of a person has to die for that. They definitely don’t believe in YOLO. This is a light manhua with good art. There are no Huge ups & downs. Overall, it is a good read. You will have great fun reading it. The MC actually uses his brain.

A Short, Power packed & Artistic beauty. Out of all the manhuas recommended here the art in this is godly. Believe me, I use some of the panels as wallpaper. If you are into supernatural stuff this may be the one for you.

The story follows a young man, who keeps having the same dreams & encounters a fortune teller. He gets a cheap haunted house for rent, meets her fated partner(FMC) & other characters. Then, later we found out he is the reincarnation of a hero who had some issues & misunderstandings with the FMC in his previous life reincarnation strikes again ooh I totally forgot the FMC is someone to die for.

This is a fantastic short read with 100+ chapters the story has ended with a —– ending. I was satisfied at least and if you are someone who can’t wait for daily updates on a story & want to know the ending right away. This might be the one for you.

THE BEGINNING AFTER THE END

A great storyline with not so great art. I wasn’t happy with it in the beginning and might be satisfied after the end. Art is a great plus point for any manhua to stand out but it is not the only factor. I emphasize a lot but, if I connect with the story no matter the art I will follow it to the end. The art point is only mentioned here to tell my lovely readers about what to expect from it. You guys are smart enough anyway.

The story follows a great king with unrivaled strength but he had lost his purpose and will after accomplishing everything. Strangely he was reincarnated into a world filled with magic & monsters. In this life, while uncovering the reason behind his reincarnation he makes sure to not repeat the same mistakes he did in his previous life.

This is going to be a rollercoaster read, till now it is having a very light storyline with no major ups & downs But, as I have been spoiled. God, why did I read comments? You can expect the story to take a really dark turn. The author must be a having a satan inside still, to develop emotions in readers like that is really commendable. I am really looking forward to the further development of the story.

So, that was all for this blog. If you do decide to pick any one of the following, do drop a comment and I would be more than happy to discuss it with you(Only if you are a girl) just kidding I am not that desperate or am I? Also please like, share, comment & subscribe & don’t forget to press the bell icon. (Shit! the wrong platform still you know what to do right?)